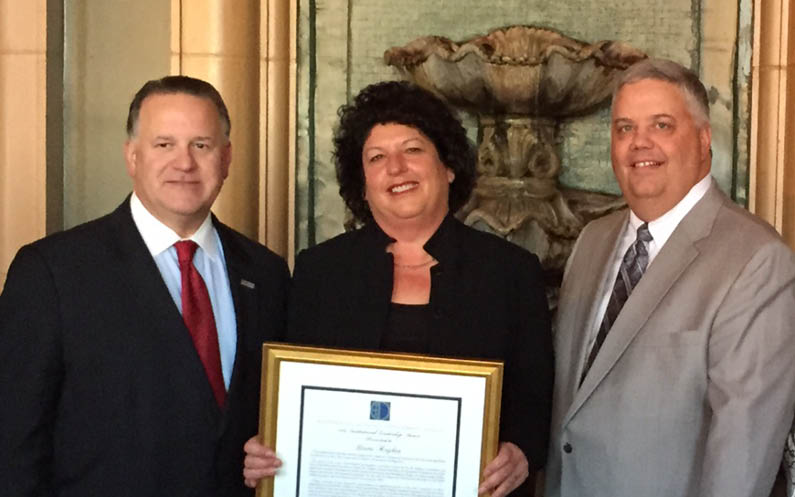 Jon Bittner was recognized as the Young Economic Development Professional of the Year, an international honor that recognizes the outstanding achievement by a young, emerging leader in the economic development profession. Bittner was selected for his recent work as vice president of AEDC, in support of developing the Alaska economy by attracting new businesses to Anchorage while incubating others from within. To achieve these goals, Bittner developed a strong entrepreneurial community in Anchorage by creating Alaska Entrepreneurship Week and founding the Alaska Maker Group. He created several foreign direct investment programs, and made inroads with several community partners to address long-term barriers to economic growth in the city. He recently joined the Alaska Department of Commerce, Community and Economic Development as deputy commissioner to provide the same innovative opportunities and outreach for communities across Alaska.

Rasmuson Foundation’s Diane Kaplan received the Institutional Leadership Award for her sustained effort and support of economic development programs throughout the state. Rasmuson Foundation has made significant investments that align with and support AEDC’s strategy of making Anchorage the no. 1 city in America to live, work and play. In particular, Kaplan has led the Foundation’s support for quality parks and recreational opportunities for city residents; the development of an economy that encourages working artists; and programming innovation for cultural organizations through creative placemaking activities. The Foundation is a collaborator in Housing Anchorage to insure the city features a variety of affordable housing to attract a dynamic workforce; and has invested millions in Anchorage’s libraries, universities and social service agencies.

AEDC brought four Excellence in Economic Development Awards back to Anchorage. The awards recognize the world’s best economic development programs and partnerships, marketing materials and the year’s most influential leaders. AEDC earned top honors, gold, for its “I Love Anchorage” Instagram project that launched in October 2013. The project has featured more than 50 guest hosts, each a resident of Anchorage, and each sharing their own diverse perspective of the city they live, work and play in. The economic development corporation’s digital magazine dedicated to local entrepreneurship, “AEDC Connections: Entrepreneurship Edition,” earned a silver award along with its special event “Pitch-on-a-Train.” AEDC’s first Anchorage Mini-Maker Faire was recognized with a bronze award for special events.