The Opportunity Alaska: Trade Mission to China wrapped up in Shanghai this week. Here’s a look back at the final leg of the journey.

We arrived mid-afternoon on Sunday and had our first event in the city, a beer tasting at the Daga Brewpub located in the old French Concession neighborhood. The event was arranged by 49th State Brewing Company with CEO David McCarthy and CFO Jason Motyka serving up great Alaska-brewed beers to over 150 attendees. A great event attended by the Alaska Delegation, locals and a lot of foreign nationals living and working in Beijing, the event took on place the rooftop patio of the brewpub. I met a young investment banker from Brazil and a reporter for Forbes from Spain as well as a number of Chinese young professionals eager to try the beer and meet the Alaska delegation. It is interesting to note that, according to an American senior executive I met from a multinational shipping company, only 3 percent of beer consumed in China is craft beer — what huge upside potential for Alaska brewers.

Monday was all about Alibaba, China’s huge online retailer, banker, travel agent, big data and everything-else-you-can-think-of company. This incredibly popular company is a global leader in innovation and technology and we were welcomed with great fanfare by its management team as we arrived at its massive headquarters campus in the city of Hangzhou, a 3-hour bus ride from Shanghai. After a tour through the Alibaba Museum, the delegation met with senior leaders of Alibaba in a summit setting.

The main focuses of the summit were tourism, seafood and using the Alibaba platform to sell goods and services to Chinese consumers and consumers around the world. This is a multidimensional company with core divisions that include digital media, core online commerce, local services (delivery), payment and financial services (AliPay and Ant Financial), logistics, marketing services and data management and cloud computing. A great deal of emphasis was given to Alibaba’s goal of providing 72-hour delivery of most any product they offer to every consumer worldwide. I could not help but note one statement on the wall in the Alibaba Museum that I think says it all:  “The Power of Consumption.”

Travel is also a huge opportunity through Alibaba’s travel app, Fliggy.  This app offers over 2 million products, including over 250,000 hotels, and is China’s largest travel services company. An example: Nov. 11 is considered an especially auspicious day to book travel in China, and in 2017 Fliggy and Alibaba combined generated over $35 billion in travel and consumer purchases in just one day. By comparison, in the U.S., Black Friday and Cyber Monday combined generated approximately $7 billion. Needless to say, the tourism and export-focused partners in the Alaska delegation were very interested in how to become a part of this massive online marketplace. Any tourism-focused Alaska business would be wise to understand and use Fliggy to offer its products to travel consumers in China. 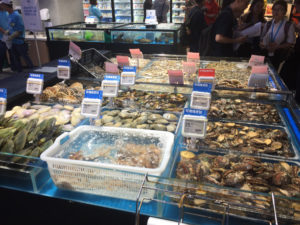 Fresh shellfish at the Hema grocery store on the Alibaba campus in Hangzhou, China.

We then toured the Hema grocery store located on the Alibaba campus. Hema is a highly popular Alibaba subsidiary that provides a huge variety of consumer goods, groceries, and prepared foods to Chinese consumers. Core principles of the chain focus on fresh, wholesome, sustainable foods as a foundation of the chain’s success. Produce was impeccable in its quality and condition. The seafood tanks were spotless and offered an amazing selection of live fish, crab and shellfish. Throughout the store were dozens of staff wearing powder blue logo shirts, picking orders for online consumers and hanging them on the ceiling conveyor belt that ran to every corner of the sales floor, whisking items away to the delivery drivers waiting on scooters, ready to deliver to the consumer’s door within 30 minutes of the order being placed. Hundreds of thousands of Chinese citizens are employed across the country in this exploding delivery service sector and Alibaba is taking full advantage of the Chinese consumers’ expectations for fresh, sustainable, high-quality food products that can be provided on demand in a matter of minutes.

Throughout the visit to Alibaba and the Hema store, it was clear that a key tool to the success of this consumer giant is AliPay. AliPay allows consumers to pay for practically anything in China with a wave of their cell phone or by using the AliPay app for online purchases. This app is used for both in-person and online shopping. Unfortunately, due to current U.S. laws and regulations, AliPay does not work in the United States. For the tourism industry, this will be a key issue of which to be aware of as vendors engage Chinese travelers to come to Alaska. It’s not a deal killer, but will definitely be a bit of a barrier to overcome.

On a side note, a critical tool for any Alaska business wanting to sell goods or services to customers in China is WeChat, an app combining elements of Facebook, Twitter, a debit card and Snapchat, all rolled into one. For any Alaskan wanting to do business with China, this free app is a must. The most brilliant aspect, from my point of view, is the ability of the app to translate English to Chinese and vice versa. Your phone becomes your free translator, available 24 hours a day.

Our last day in Shanghai and in China was spent touring the Port of Shanghai provided by Matson and attending an Alaska Seafood reception sponsored by the Alaska Seafood Marketing Institute (ASMI).  The Port tour was focused on the newly opened Yangshan Phase IV Automated Terminal, located at the end of a 30-plus mile causeway from the mainland, described as the largest automated container terminal in the world. This fully automated port facility uses robotic cranes and electric container transports to load up to 40 containers per hour per handling line, a marked increase over a more traditional human-operated crane facility that can load an average of 25 containers per hour. The dock can handle the largest class of container ships and on the day of our visit, we witnessed the loading of a very large container ship capable of handling 6,000 40-foot containers. The entire operation was directed from a 20-story control tower in which operators stationed at remote control workstations operated and directed the robotic cranes and electric transports to smoothly and efficiently sort, stack and load hundreds of containers at each of the docks. I have to say that the entire delegation was extremely impressed with this facility.

Our day closed with the amazing Alaska Seafood reception hosted by the Alaska Seafood Marketing Institute at the 5-star W Hotel in the heart of Shanghai. The invitation-only reception was targeted towards seafood buyers, as well as food media writers. Over 300 guests were in attendance in addition to the Alaska Trade Delegation. Alaska seafood was on full display and the 100-foot-long buffet was an amazing presentation of the many ways Alaska seafood could be prepared in line with Chinese consumer tastes. Probably the most popular dishes included the curried pollock and braised cod, as well as the salmon balls. The dish that received the most attention by far was the King Crab legs served with a number of dipping options provided by Golden Harvest Seafoods. Piles of crab legs were consumed with great relish and gusto by the guests. I should also note that 49th State Brewing Company was there to offer a variety of the fine-quality Alaska beer they brought to the event — also a big favorite of the seafood buyers and food writers. Governor Bill Walker offered up a great pitch to the attendees about the quality of Alaska seafood, and several of the seafood industry members of the Alaska delegation offered their pitch to the buyers in the room from the main stage. It was a great event to wrap up the trade mission.

As we prepared to leave Shanghai to return home to Alaska, our dog-tired delegation was feeling pretty good about the results of the trade mission. Our trip across China had a lot of positive results to show for the hard work and efforts of the delegation members. I was particularly impressed by level of engagement and efforts put in by companies like Bambino’s Baby Food, 49th State Brewing Co., Copper River Seafoods, Trident Seafoods, Golden Harvest Seafoods, Alaska Skylar Travel, Visit Anchorage, RIM Architects, RIM Design, PT Capital, NANA Regional Corporation, Bering Straits Native Corporation, Matson Inc., Alyeska Resort, Mat-Su Economic Development Corporation, Fairbanks Economic Development Corporation and the many other participants in the trade mission.

I strongly believe this trade mission was a great success. There are significant opportunities that are already being realized, such as the Chinese Olympic team agreement with Alaska Pacific University and the many connections made between Alaska tourism vendors and visitors bureaus and Chinese tour operators. There are also potential significant new investments in Alaska from Chinese business interests with good odds of being successfully developed in the near to mid-term future, including direct passenger flights from China to Ted Stevens Anchorage International Airport, seafood investment and a number of other potential investments that will create jobs in Anchorage and Alaska and improve our economy as a result. Do not be fooled into thinking this investment will happen easily: There is a lot of work that will have to be done in the coming months and years to fully realize the potential of China as an expanding market for Alaska goods and services. We have much to do in our city to prepare for what could be a significant increase in Chinese tourism, especially in the winter season when our tourism trade traditionally goes mostly into hibernation. Issues we will need to address include workforce capacity, language skills, translated signage, menus, etc. Anchorage must position itself to welcome the potentially thousands of affluent visitors from China we may see visiting our city and state in the near future. But I think we are up to the task and will reap the benefits of a lot of hard work to engage this important market opportunity for Anchorage and Alaska. I truly believe that now is our time to shine in the marketplace that is China, and AEDC will be actively supporting efforts to both increase exports from Alaska to China and to support foreign direct investment from China that will result in more jobs for Alaskans and a stronger economy as a result.