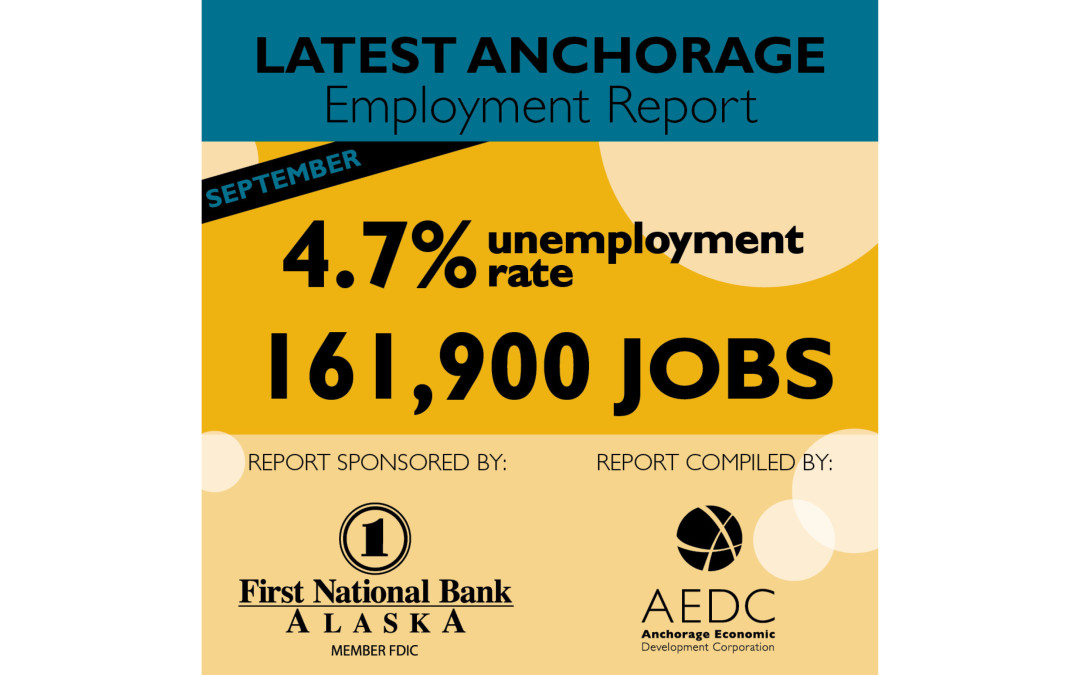 The unemployment rate for Anchorage in September was 4.7 percent, the lowest September unemployment rate for the city since 2001, according to the latest report from the Anchorage Economic Development Corp. The rate marks a 0.2 percent increase from August’s revised rate, but continues to remain well below the national and statewide averages. The economic report is further strengthened by the latest housing market data from Alaska MLS, which shows a 12 percent increase in the number of homes sold in September compared to August.

“We generally see around a 1.5 percent or less decline in jobs numbers between August and September. This year’s decline was significantly less, indicating that seasonal jobs may be lasting longer than usual,” said Bill Popp, AEDC president and CEO. “Overall, Anchorage is seeing a very well-employed workforce.”

The Anchorage employment preliminary estimate for September was 161,900, an increase of 2,000 jobs over September of last year. The private sector has grown by an average 489 jobs so far this year, while government employment has stayed flat. Nine of the 10 major industries’ job estimates for September 2015 are at or above September 2014 totals.

In the goods producing group, which includes construction, mining, oil and gas and manufacturing, employment has increased by 156 jobs year-to-date compared to the same period last year. The mining and logging industry gained 56 jobs and the construction industry gained 133 jobs when compared to the same period in 2014. The manufacturing industry is the only industry in this group to show a decrease in jobs, with 11 fewer jobs year-to-date than last year at this time.

The services providing group, which includes engineering, retail, tourism and health care, showed growth of 333 jobs compared to the same period in 2014. Within this group, the information industry continues to lead, increasing 3.89 percent year-to-date compared to the same period last year. The monthly estimate grew by 200 jobs from August to September, the first month-to-month increase above 100 since 2010.

Alaska MLS also notes continued low inventories of single-family homes for sale in September, with 877 homes listed representing the lowest level in 5 years. The average sales price of a single-family home now stands at nearly $369,000, up $9,000 compared to the same period in 2014.

“It’s a seller’s market with prices up as a result of higher demand and continued tight housing inventories,” noted Popp. “This is another indicator of the continued strength of the local economy.”