Today is the big China-U.S. Governors Conference. A lot of speeches are in store and apparently, a very high official from the Chinese government leadership inner circle will be a surprise featured speaker. While I do not know who yet, we’ve been informed that security is now going to be at a much higher level and we have been strongly advised to be sure to have our credentials badges in plain sight at all times. With the truce called between China and the U.S. in the trade war over the weekend, our delegation is in an amazing time and place. Ours is the largest delegation from the U.S. at the trade conference today, with the New Mexico delegation in second place with five members.

Yesterday, Governor Bill Walker met in Beijing with the #2 leader of the Chinese government. I am giving what support I can to the Alaska tourism and seafood presentation sessions Tuesday morning, then I have my own AEDC table at the speed dating business-to-business session that ends the day. A translator and I will be meeting with several interested Chinese businesses to talk about investment opportunities in Anchorage and Alaska, though I will not know who they will be before the session. I’m going to have to be pretty fast on my feet for this session. It’s going to be very interesting to see what kind of hand I have been dealt by the Chinese Investment Corporation (CIC), the company doing the matchmaking.

After recuperating from travel Monday, the full delegation went out together for dinner last night. We enjoyed a great meal of traditional Sichuan hot pot, gathered around group tables with a large two-chamber soup pot over a gas burner at the center. One side was mild, the other side packed with multiple kinds of regional peppers and chili oils not for the faint of heart. It was communal eating with various meats, shrimp balls, squash, potato, greens, noodles and other local delicacies dropped into both sides of the pot at various times to cook. As the various items were cooked in a minute or several, guests then scooped out what they wanted. I enjoyed both sides of the pot. My chopstick skills got a workout and it was good practice for the coming days.

The spicy side of the pot required one to be very careful about which peppers made it into one’s mouth.  When the inevitable happened and a tiny fragment of one of the more ferocious peppers made it into one’s mouth, comedy ensued.  will admit that when the first piece of pepper made it past my close scrutiny and hit the back of my throat, I nearly grabbed the two-liter bottle of beer to drown my pain. I managed to maintain my dignity — no tears! — but the meal was definitely an attention getter.

The best moment of the evening was when one of our tablemates asked why there was a black oval rock in the bottom of the mild side of the pot. Was it some kind of mineral salt? No. It was not to add salt, but to add flavor. Turtle flavor. Yes! It was an approximately 8-inch turtle cooked whole and added to the pot. Hilarity ensued when all four tables of Alaskans realized at about the same time what they had been enjoying with such gusto! Another guest fished the little reptilian flavor pack from the bottom of the pot for a closer examination: It was completely intact, stubby legs and head on full display as the turtle hung precariously on the ladle just above the boiling broth full of all the delightful meats and veggies we had all been enjoying with great relish. A couple of people at our table, trying their absolute best not to offend our servers, politely asked that the turtle carcass be taken away. Once our newly found little flavor buddy had been whisked away by our very perplexed servers, there was a noticeable shift in who was still hungry and who was now “full” at our table. More for me…

Two of the other tables dropped their flavor buddy back in the pot and kept right on eating. The fourth table did what any self-respecting group of locals would do: They ate it, popping off the turtle’s little shell off and digging in. One member of that table noted to the group how delicious the kidneys were. All in all, it was a great meal and a great evening with my fellow delegates. My only regret was my failure to take more pictures, especially of our flavor buddy! 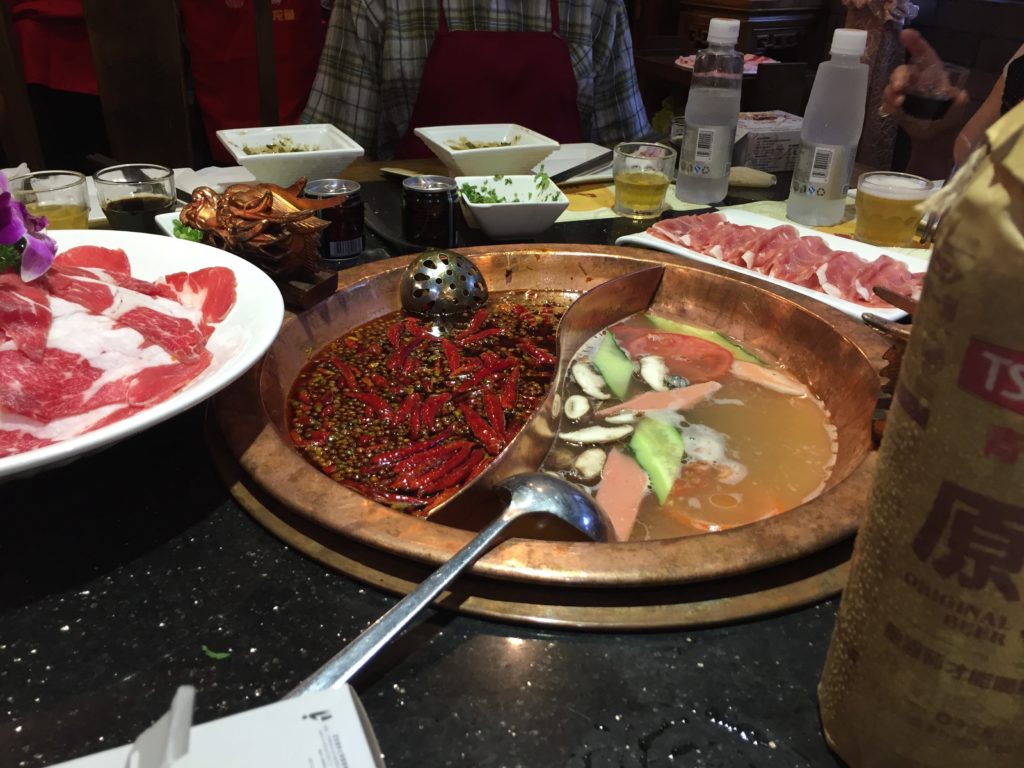