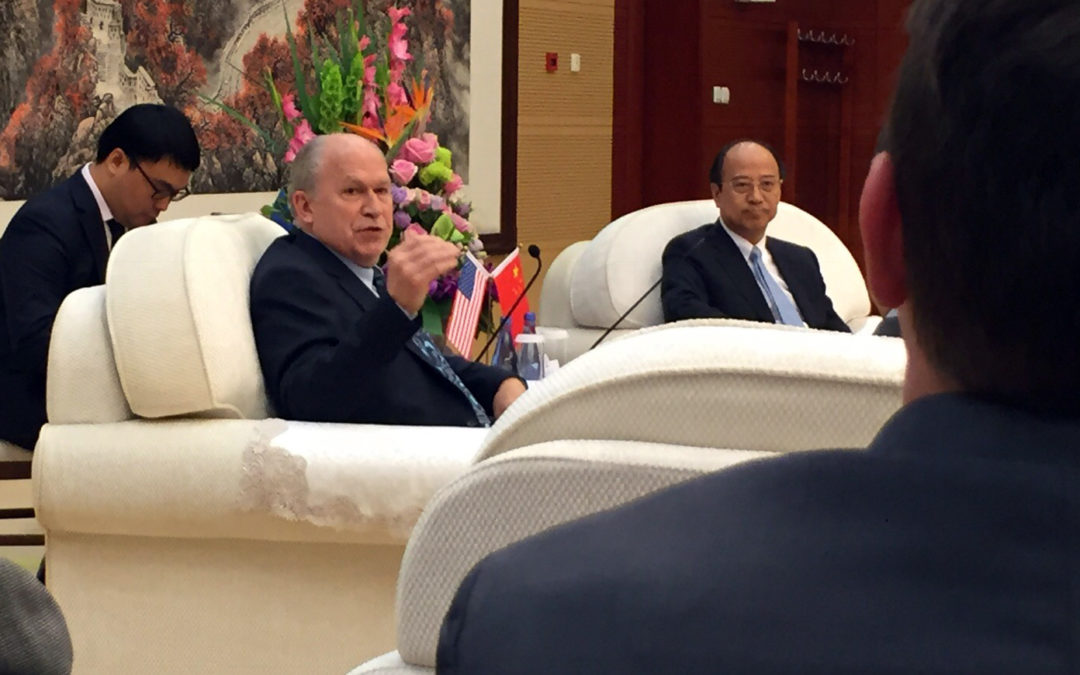 Friday was filled with non-stop meetings from morning into the evening, beginning with a meeting with Mr. Dai Houliang, President of Sinopec Group. A vertically integrated oil and gas, refining and petrochemical company, Sinopec Group has more than 780,000 employees worldwide and is ranked third in the Fortune 500 International Companies list. Sinopec Group is a key new partner in the Alaska gas line project and this meeting was an update opportunity for both partners. All of the key leaders of Sinopec Group were present, and it was very obvious how much importance the company places on the Alaska gas line project, an investment key to meeting China’s goal of dramatically increasing its usage of LNG to replace coal as the dominant source of energy in the country.

The next meeting was a targeted breakout session with Director Gou Zhongwen of the Chinese Government’s General Administration for Sport, who oversees China’s Olympic team and is a key player in the organizing of the 2022 Beijing Winter Olympics. Governor Walker, supported by other members of the trade delegation including Eric Fullerton, VP and Director of Marketing for Alyeska Resort, engaged Director Gou in a discussion about how Alaska could offer training opportunities for Chinese athletes in several sports. This conversation followed the recent agreement reached in Chengdu for Alaska Pacific University to host and train Chinese Olympic cross-country skiers at its training facilities near Girdwood. The Friday meeting was an amazing success, resulting in an agreement in principle for Alyeska Resort to house additional members of the Chinese Olympic cross-country ski team while they are training at the APU training facilities. Additionally, after explaining the excellent downhill skiing facilities at Alyeska Resort, there is now an agreement in principle for the Chinese Olympic downhill ski team to train at Alyeska Resort. And finally, an additional agreement in principle was reached for two Chinese Olympic hockey teams to train at the Sullivan Arena in Anchorage. All of these agreements are for the next five years. What a win for the trade mission, and way to go Governor Walker and Eric Fullerton! 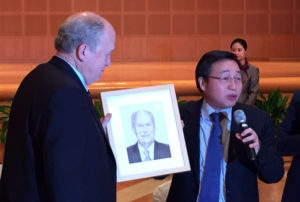 Alaska Gov. Bill Walker receives a gift from Chen Siqing, Chairman of the Board at the Bank of China.

The big event of the day was the banquet held in honor of Governor Walker and the trade delegation at the global headquarters of the Bank of China. Our host, Mr. Chen Siqing, Chairman of the Board at the Bank of China, was supported by all the members of his key leadership team, who were seated throughout the banquet hall with the Alaska delegation. Again, it was clear by the level of leadership present and lengths to which they went in hosting us that the Bank of China values the Alaska gas line project — as well as the numerous other trade opportunities Alaska offers to China in tourism, minerals, energy and other exports. This was personally expressed to me by Mr. Liu Qiang, Executive Vice President of Bank of China, who I had the pleasure of sitting next to during the event. He expressed his own strong personal views that the Alaska gas line project was a key investment for his bank to develop; that it made sense in a number of ways, including helping to solve China’s coal pollution problem and improving the balance of trade between the U.S. and China, and that America and Alaska are viewed as stable and safe regions for investment. The evening was a great success for all, with many toasts exchanged at all the tables. The evening came to an end with Chairman Chen presenting Governor Walker with a traditional portrait of himself and Governor Walker presenting Chairman Chen with his personal Alaska lapel pin that pictures Alaska with two pipelines.  Governor Walker has worn this pin since taking office and Chairman Chen accepted his gift with great honor, obviously moved by this very personal gift.

Coming up: a meeting and dinner with the Chinese National Aviation Fuel company.