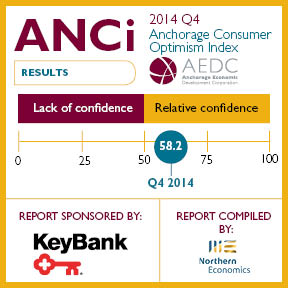 Sponsored by KeyBank and produced by Northern Economics, Inc. on behalf of AEDC, the ANCi measures consumer confidence using data from a random quarterly sample of at least 350 households in the Municipality of Anchorage. The ANCi reading is expressed on a scale of 0 to 100; a value over 50 indicates relative confidence in the economy and the distance from that median indicates the strength of that confidence.

In 2014 Q4, ANCi fell back sharply from its record high set in the third quarter, dropping to 58.2 from 63.4 in 2014 Q3. The more stable
six-month moving average of the index also fell, though the drop was softened by averaging over two quarters; it fell 2.5 points to 60.8. These changes are the largest absolute (positive or negative) quarter-to-quarter changes ever recorded by the index. While this movement in the index is significant, Anchorage consumers’ opinion of the economy still shows relative confidence.

In contrast to the situation in Anchorage and more broadly in Alaska, U.S. consumer confidence increased over the quarter. The Conference Board’s Consumer Confidence Index® increased 4 percent from September to December, with a marked increase in present sentiment and a smaller increase in expectations. The University of Michigan’s Consumer Sentiment Index shot up more than 10 percent over the quarter, with a dramatic increase in expectations. Falling oil prices are positive for much of the United States, but they present a very real threat to Alaska’s and Alaskan’s fiscal health.