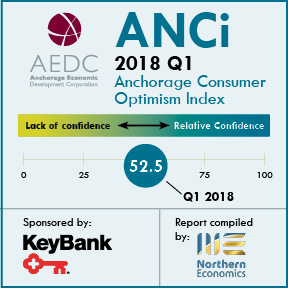 In 2018 Q1, ANCi was down from the previous quarter, both in aggregate as well as in the individual components. The index landed at 52.5, down 1.8 points. The index is still above the 50 level, an important level signifying the boundary between optimism and pessimism. The more stable six-month moving average of the index rose to 53.4 as the low two quarters ago gave way to the two most recent, and higher, readings.

Due to the averaging and where we’ve been in recent quarters, the index is at a level not seen since the fourth quarter of 2015. During the same time, U.S. consumer confidence increased across the board. The Conference Board’s Consumer Confidence Index® rose 5.6 points from December to March, while the University of Michigan’s Consumer Sentiment Index rose 5.5 points. Both measures showed increases in the present situation as well as consumers’ expectations for the future.

Fiscal concerns remain as the Alaska Legislature continues without a long-term fiscal plan, though oil prices have increased again, easing some of the anticipated strain this year. Some members of the Alaska Legislature have announced that they will not establish new taxes this year, however, and residents’ expectations for the economy are slightly more pessimistic than
last quarter. State economists point to slowing job losses in the private sector, although they have acknowledged that we may soon be out of the recession, though an actual recovery is a different animal and is likely to be slow until the state’s fiscal situation is addressed.