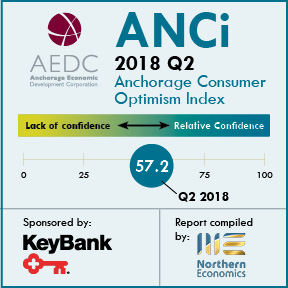 In 2018 Q2, ANCi was up sharply, landing above the index reading from 3 years ago in 2015 Q2. The index was 57.2, up 4.7 points from last quarter and up nearly 10 points from a year ago. The index is strongly above the 50 level, an important level
signifying the boundary between optimism and pessimism. The more stable six-month moving average of the index rose to 54.8, bringing us back to the reading from the fourth quarter of 2015.

During the same time, U.S. consumer confidence increased across the board. The Conference Board’s Consumer Confidence Index® rose 4.3 points from March to June, while the University of Michigan’s Consumer Sentiment Index rose 2.3 points. Both measures showed increases in the present situation as well as consumers’ expectations for the future.

Fiscal concerns remain at the state level, but progress by the Alaska Legislature at passing a budget and strong and stable oil prices have allowed some optimism to return. Employment numbers — which provide a better measure of economic activity than gross state product, due to the dominance of oil prices in our state’s GSP — released in recent months signal that the
job losses from the recession have slowed. We are still in a recession and state economists have pointed out that the path to recovery will likely be a slow one until the state’s fiscal situation is addressed.