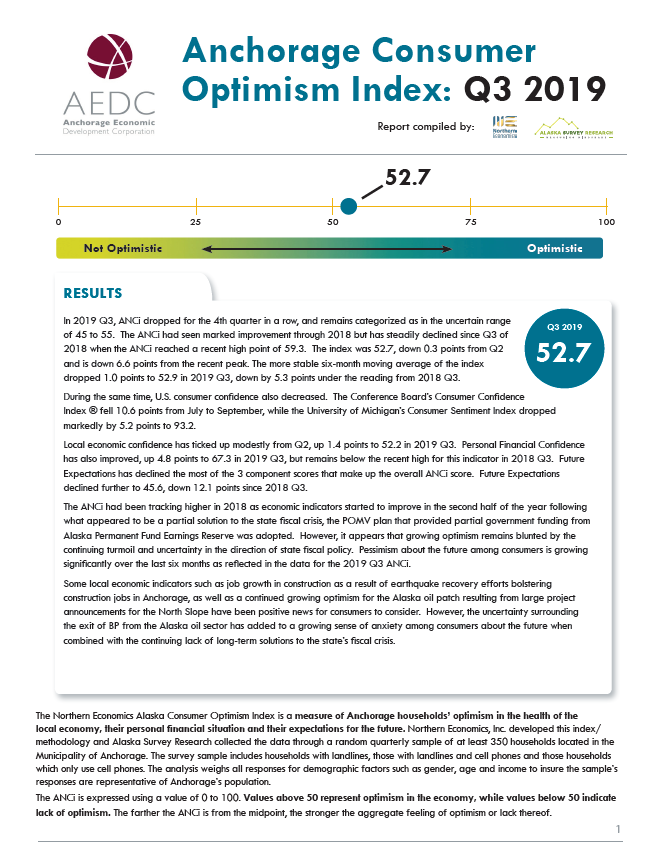 Local economic confidence has ticked up modestly from Q2, up 1.4 points to 52.2 in 2019 Q3. Personal Financial Confidence has also improved, up 4.8 points to 67.3 in 2019 Q3, but remains below the recent high for this indicator in 2018 Q3. Future Expectations has declined the most of the 3 component scores that make up the overall ANCi score. Future Expectations declined further to 45.6, down 12.1 points since 2018 Q3.

The ANCi had been tracking higher in 2018 as economic indicators started to improve in the second half of the year following what appeared to be a partial solution to the state fiscal crisis, the POMV plan that provided partial government funding from Alaska Permanent Fund Earnings Reserve was adopted. However, it appears that growing optimism remains blunted by the continuing turmoil and uncertainty in the direction of state fiscal policy. Pessimism about the future among consumers is growing significantly over the last six months as reflected in the data for the 2019 Q3 ANCi.

Some local economic indicators such as job growth in construction as a result of earthquake recovery efforts bolstering construction jobs in Anchorage, as well as a continued growing optimism for the Alaska oil patch resulting from large project announcements for the North Slope have been positive news for consumers to consider. However, the uncertainty surrounding the exit of BP from the Alaska oil sector has added to a growing sense of anxiety among consumers about the future when combined with the continuing lack of long-term solutions to the state’s fiscal crisis.