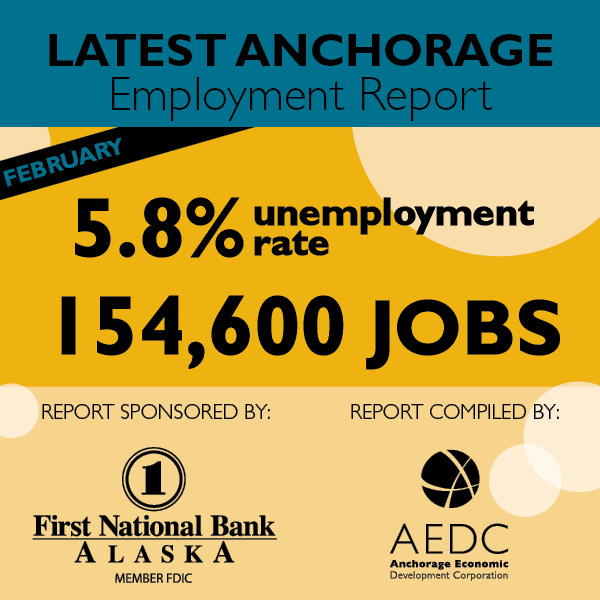 The preliminary unemployment rate for Anchorage in February was 5.8 percent, an increase of 0.4 percent from the month before, according to the latest report from the Anchorage Economic Development Corp. This rate sets the 2016 year-to-date Anchorage unemployment rate at 5.6 percent, 0.4 percent higher than at this time last year. The numbers are above the national rate of 4.9 percent but well below the statewide rate of 7.7 percent.

The report’s employment estimate for February showed 154,600 jobs held in Anchorage, a net increase of 100 jobs over February of last year. The private sector has decreased by 250 jobs since last February year-to-date, while government employment has grown by 350.

The number of jobs in the goods producing category, which includes construction, mining, oil and gas and manufacturing, is showing significant change to its previously strong growth last year. The February total of 12,400 jobs is 800 less than February 2015 in this same category. The mining and logging industry (which includes oil and gas employment) saw a decrease of 350 jobs, while construction is showing 300 job losses over 2015 year-to-date. The oil and gas sector is down 400 jobs so far this year when compared to 2015.

The services providing category, which includes engineering, retail, tourism and health care, totaled 142,100 jobs for February, down 750 compared to February 2015. However, the trade/transportation/utilities industry has grown by 450 jobs at a growth rate of 1.4 percent. The retail sector continues its strong growth trend, and added 300 jobs year-to-date compared to 2015. The health care sector has maintained steady growth, a trend since 2003, with an increase of 250 jobs over 2015 year-to-date.

State government is down 300 jobs year-to-date through February compared the same period in 2015.  Local government has added 300 jobs and Federal government employment has risen by 350 jobs during the same timeframe compared to 2015.

“We are going feel a bit of a pinch in the job market this year,” said Bill Popp, president and CEO of AEDC. “But we expect the health care, air cargo and tourism industries to be the bright points in an uncertain year for employment.”