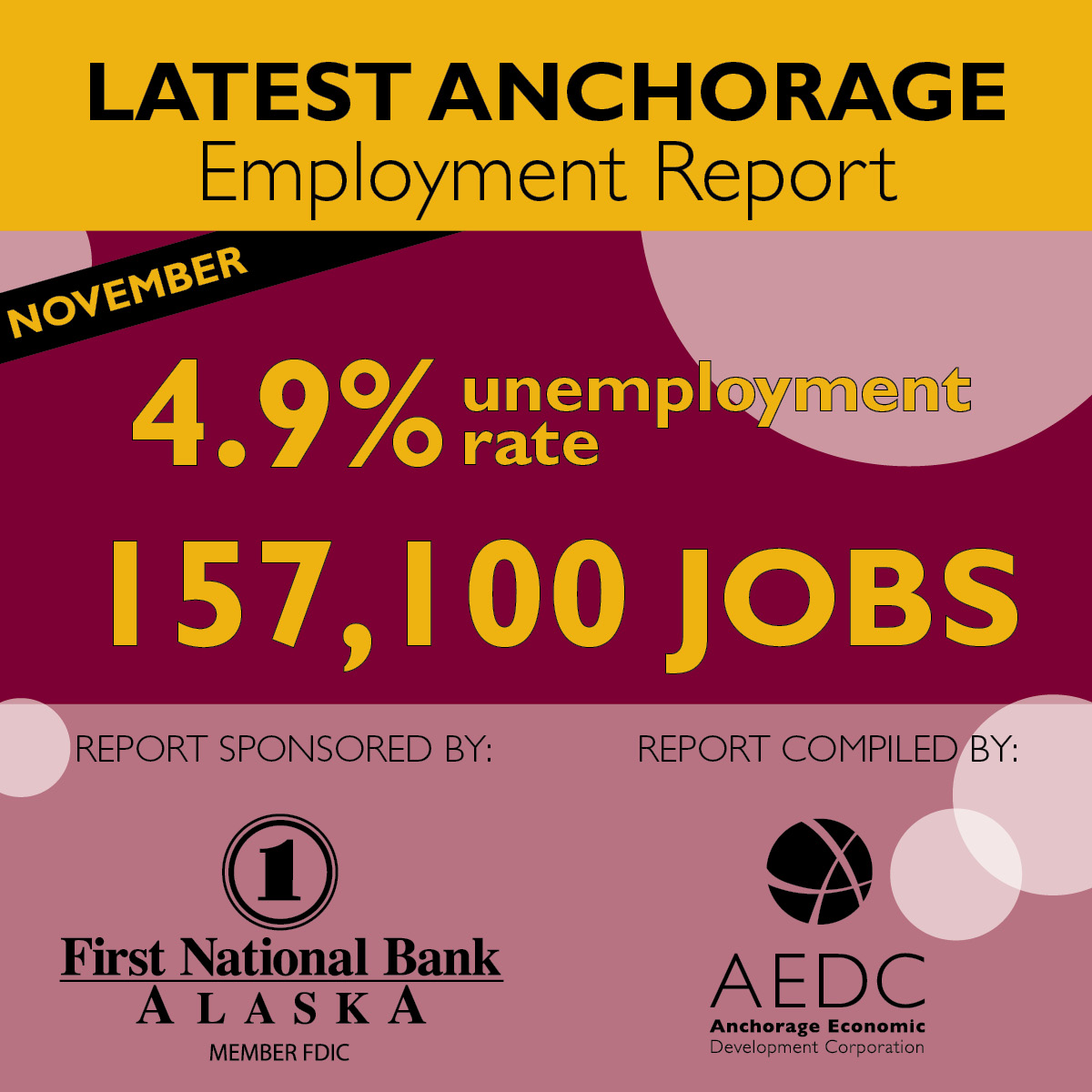 Anchorage unemployment in November 2015 was 4.9 percent, according to the latest employment report released by the Anchorage Economic Development Corp. and sponsored by First National Bank Alaska. The November rate shows a slight increase in unemployment from October’s revised rate but remains lower than both national and statewide rates of 5.0 and 6.4 percent.

The Anchorage employment estimate in November was 157,100 jobs. This includes jobs held by city residents and commuters and was an increase of 700 jobs when compared to the year before. The average total of private sector jobs in Anchorage from January to November increased by 481 compared to the same period in 2014, while government jobs have decreased by 55. Eight of the 10 major industries’ job estimates are at, or above, November 2014 totals.

“We saw a monthly employment decline from October to November last year that is comparable to the declines we saw in 2013 and 2014,” said Bill Popp, AEDC president and CEO. “This may indicate the estimates for the remainder of 2015 are going to follow a similar curve, but with 2015 numbers still remaining higher than previous years.”

Within the services-providing job category, which includes the information industry, engineering, retail, tourism and health care, the information industry continues to lead with the most growth, increasing 3.6 percent year-to-date when compared to the same period the previous year. The monthly estimate of 4,100 jobs showed an increase of 200 jobs over November 2014. The telecommunications sector leads this growth, averaging 125 more jobs during this time than during the same period in 2014.

The goods-producing category, which includes construction, mining, oil and gas production and manufacturing, has increased by 136 jobs year-to-date, when compared to the same period the previous year. The oil and gas sector, which is part of the mining and logging industry, shows a total increase of 45 jobs over the same period in 2014. Positive developments in the oil and gas sector during November include ConocoPhillips’ investment of $900 million to develop Greater Moose’s Tooth, ExxonMobil’s efforts peaking at its Point Thompson field on the North Slope and Caelus Energy’s recent commitment of more than $200 million to develop its Cosmopolitan Project in Anchor Point.