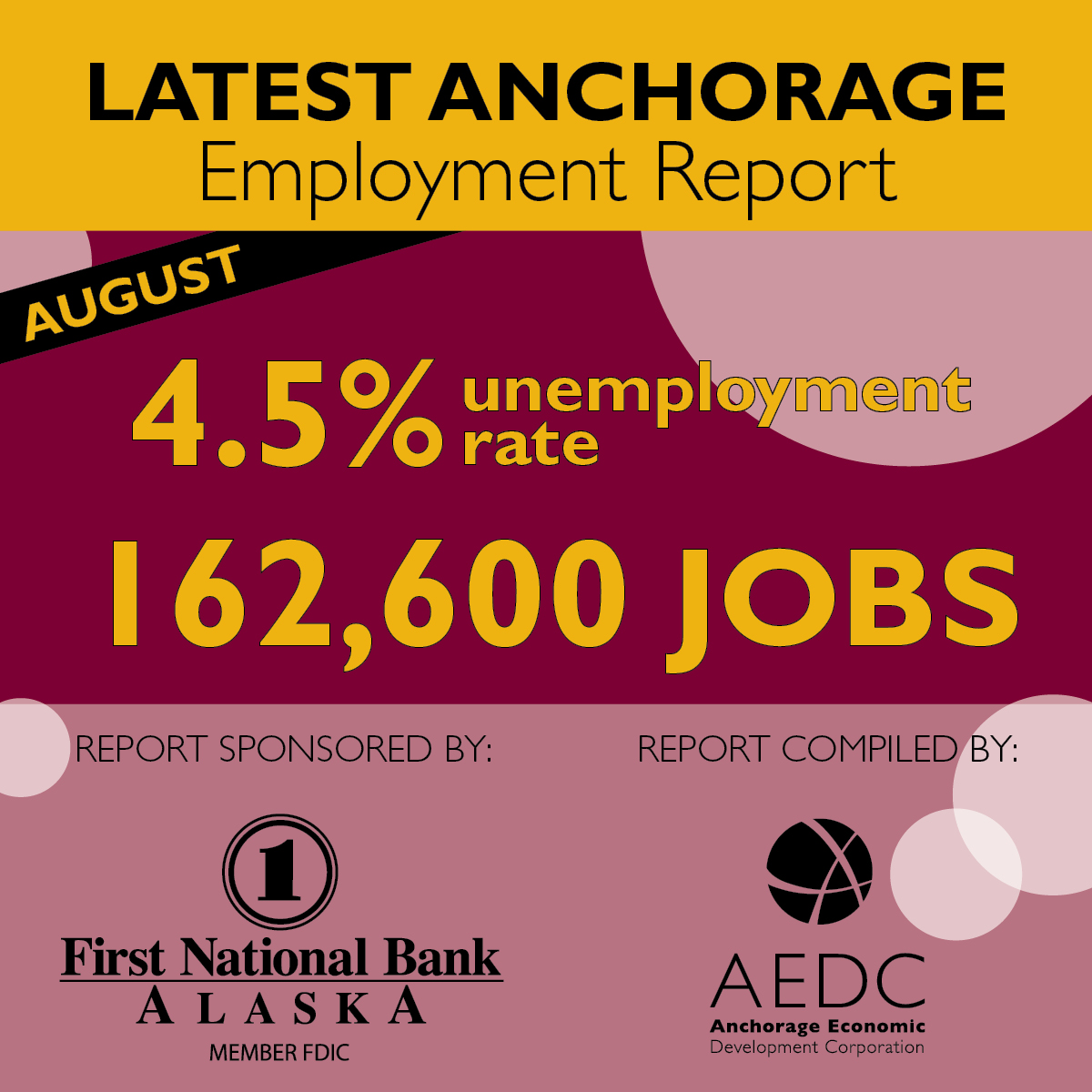 Anchorage unemployment in August dropped to 4.5 percent, a 0.3 percent decrease from July’s revised rate, according to the latest employment report release by Anchorage Economic Development Corp. and sponsored by First National Bank Alaska. The rate remains below the national rate of 5.2 percent and the statewide rate of 5.5 percent.

“Last month was the first time since October 2006 that Anchorage’s unemployment rate fell to 4.5 percent,” said Bill Popp, AEDC president and CEO. “This can be attributed to steady jobs numbers across many Anchorage business sectors, even as we transition out of summer employment and into the Permanent Fund and holiday seasons.”

The average number of jobs so far this year in Anchorage is 157,213, an increase of 263 jobs over the same period last year. The private sector has grown by 288 jobs during this time, while government employment has decreased by 25. Job estimates for seven of the 10 major industries have remained flat or have seen a slight increase since August 2014.

Employment in the goods producing group has increased by 125 jobs year-to-date when compared to the same period last year. Within this group, the construction industry has improved by 88 jobs and the mining and logging industry by 38 jobs when compared to 2014 year-to-date numbers. The manufacturing industry is the only industry in this group to show a decrease in jobs, with 25 fewer jobs so far this year than in August of 2014. The oil and gas sector, part of the mining and logging industry, is up 63 jobs in Anchorage when compared to this time last year. Continued growth in oil jobs for the coming months is unlikely, given recent news from Shell and ConocoPhillips. However, oil jobs in Alaska are currently tracking in record high territory at 15,000 direct jobs and remains an important component in the Anchorage and Alaska economies.

The services providing group shows an increase of 400 jobs when compared to August of last year. Within this group, the information industry continues to lead, increasing 3.45 percent so far this year when compared to the same period last year. The industry’s monthly estimate broke 4,200 jobs in June for the first time since December 2010 and remained there through August.

Also within the services providing group, the retail trade sector shows a growth of 463 jobs so far this year when compared to the same period in 2014. Retail employment tends to dip slightly in September as tourism-related businesses scale back after the summer rush, but hiring quickly picks up again during the holiday season.