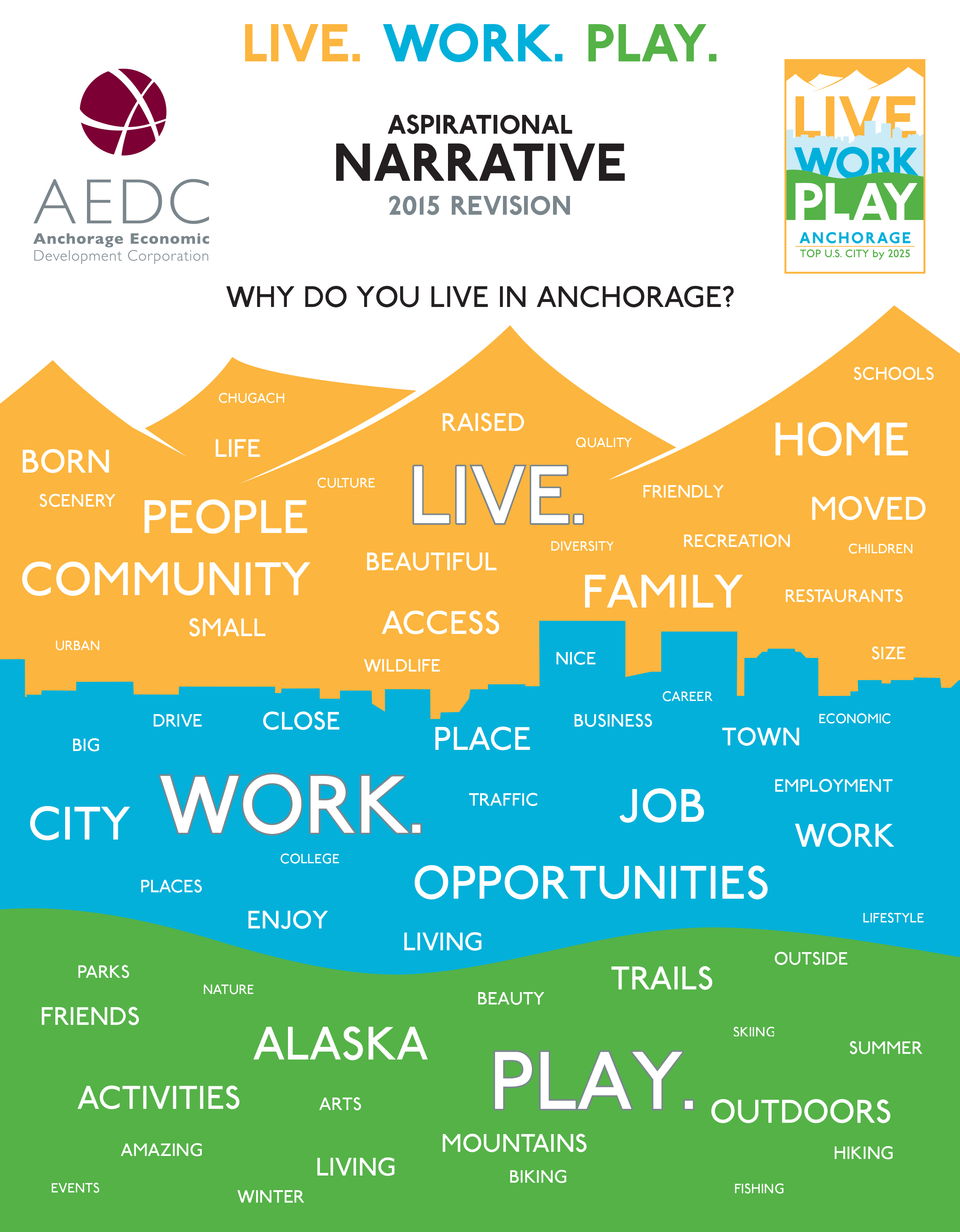 The Anchorage Economic Development Corporation (AEDC) has a bold vision:  to make Anchorage the #1 city in America. AEDC strives towards this goal through a grassroots movement called Live. Work. Play. (LWP). The rationale for such a vision goes beyond the traditional economic development model and responds to a shift in paradigm – people are no longer forced to go where the jobs are, instead they are choosing places based on where they want to live and the jobs are following them. LWP works to foster the development of the city’s economy by supporting community re-development efforts through a focused approach toward identifying and addressing issues, strategic partnerships and a rigorous data-driven evaluation of the movement’s progress.

The LWP vision was adopted by the AEDC Board of Directors in 2010. To set the goal and measure progress towards achieving it, an aspirational grass-roots Narrative was developed along with a set of over 30 quantitative metrics to measure each element of Live, Work and Play. To form the Narrative, a community survey was conducted comprised of two questions: 1) Why do you live in Anchorage? 2) Why would you leave Anchorage? This original survey generated 750 responses. The responses were then reviewed by a committee of local volunteers, who summarized them through the creation of the LWP Narrative.

LWP has grown from 35 supporters in 2010, to over 200 in 2015, who are working on more than 40 projects with a shared objective. In 2015, AEDC announced the re-launch of our LWP initiative survey, in an effort to get a new pulse on Anchorage and check that our Narrative is still on-point.

The 2015 survey was conducted over seven months and resulted in over 1,275 responses. A new LWP Narrative Review Committee was formed, made up of over 30 community members from a diverse array of backgrounds. The Review Committee examined all of the new survey responses and from them made revisions to the Narrative.

The results of the Committee’s work are presented here. Anchorage’s Narrative for Live. Work. Play. gives a detailed look at what our community will be when it is the #1 city to live, work and play in 2025, from the perspective of its residents.